If your destiny is a beach vacation this year, it’s important to know how to spot threatening water conditions and how to avoid/or escape them. This information could save your life. 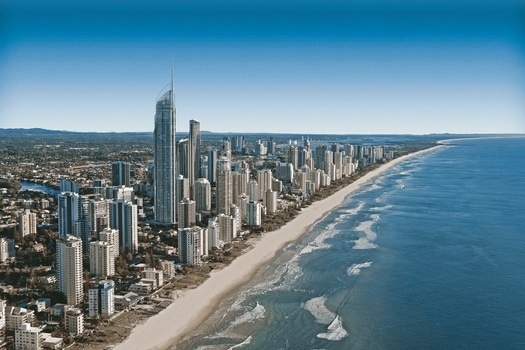 Be Aware of the #1 Beach Danger — Rip Currents:

I discussed rip currents in a previous post, but with summer coming upon us, it bears repeating. Rip currents (sometimes erroneously referred to as riptides or undertows) are the cause of about 80% of most ocean and large lake drownings. These are strong, narrow channels of water that can pull swimmers away from shore rapidly, no matter how strong a swimmer they are. They do not pull swimmers under the water, but rather out to sea.

Rip currents have been known to pull people in while wading in shallow water that is only knee-deep.  Rip currents present a very real danger–children have been pulled out to sea, even while playing along the shore.

Where swimmers run into a problem is when they panic and become exhausted while trying to swim against a rip current rather than out of it.

Rip currents can be found on some of the most popular beaches–many travelers are unaware of their dangers.  This topic is a hot button for me because I saw firsthand what can happen if caught in a rip current.  While on a business trip to a popular resort, there were two people in our group that narrowly escaped drowning–they got caught in a rip current.  That same week, a child was suddenly pulled out to sea while playing in the sand in the shallow water. Thankfully, they were wearing a life jacket and were rescued.  There were no warning signs or beach flags.  I later found out that this beach has dangerous waters but the majority of beachgoers (me included) had no idea. The resorts did a good job of hiding this from the tourists. 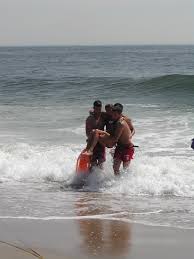 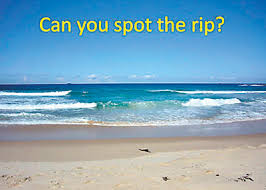 Notice the break in the wave pattern –   Photo from NOAA.gov

How to Spot Rip Currents:

It may be difficult to identify the signs that a rip current is present because they can be very subtle. Before entering the water, look for the following clues. You may see one, all of them, or possibly none of them, even though a rip current may be present. Remember…a rip current can be right along the shore and can pull you out when you are just wading. 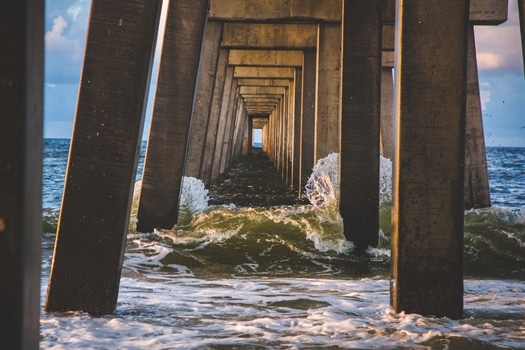 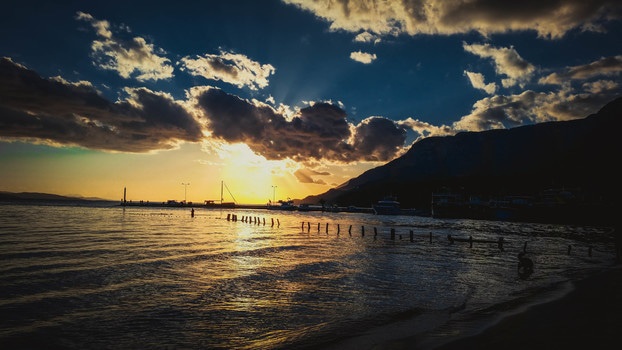 Rip currents are common around jetties and sandbars. 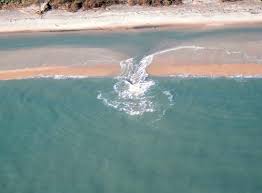 Photo of a rip current from noaa.gov 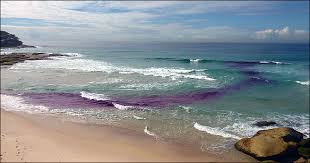 Notice the discoloration of water–Photo from noaa.gov

What Should You do if You Get Caught in a Rip Current?

You will know it when it happens. Suddenly you will feel a strong pull of water lifting you up and moving you rapidly out to sea. If you are aware of what is going on, you can calm yourself down by reminding yourself that you can swim out of a rip current—you just need to know how to do it. Remember, the rip current will generally dissipate outside the breaking surf, and it is a narrow channel of water.

How to Safely Swim Out of a Rip Current:

1. Most importantly, don’t fight the current or try to swim back to shore. This will cause you to become exhausted, and you won’t make any headway. A rip current can flow seaward at 5 to 8 mph.

2. Swim parallel to the beach (which is perpendicular to the rip current).

3. Once out of the current (it will end!), swim at an angle (away from the current) toward shore. Rip currents are concentrated in one area so you can swim out of them by going parallel to shore.

5. If you cannot swim out of the current, float or tread lightly until you are out of the current (they usually dissipate outside the breaking surf), and then swim back to shore at an angle away from the rip current. If treading water, face shore, wave your arms and yell for help. 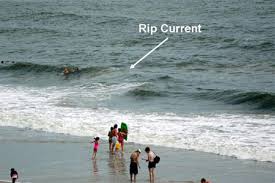 A channel of churning, choppy water – Photo from ceoe.udel.edu

6.  Unless you are trained in swim rescues, do not try to swim out to rescue someone. Many drownings occur through these attempts. Instead, throw a floating device (even a cooler or ball) or toss out a rope. Shout directions to them loudly—urging them to swim parallel to shore—and try to keep them calm, while calling for help.

Keep in mind that most people drown because they panic and try to swim straight back to shore against the rip current. 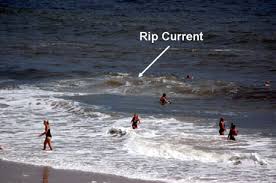 A channel of churning, choppy water 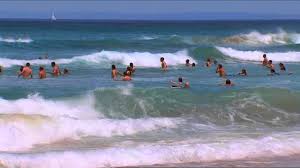 Notice the change in the wave pattern on the right – Photos from ceoe.udel.edu

Notice the discoloration of the water

If you are not familiar with the water conditions, swim at beaches with a lifeguard. 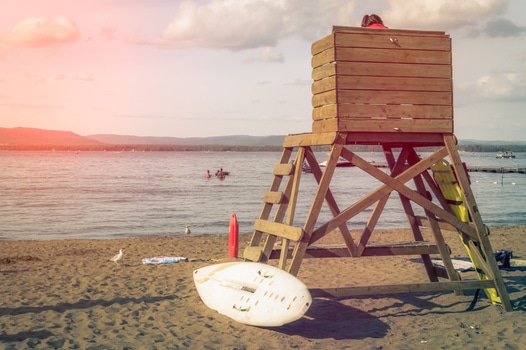 To check beach conditions in the U.S., check with the National Weather Service Surf Zone Forecast.

Have a safe journey to the beach!

For more information on rip currents, check out the National Weather Service.